An artist spotlight of comic book writer and artist Franks Miller who first became noticed in my eyes with his ground breaking Dark Knight Returns, which fused his art with his classic story telling, but to me now his most prolific work has been Sin City and 300 which have been my favourites for a while now.

Franks art on the surface looks simplistic, compared to todays artists were the details over shadow the story telling at times, but set his art against his many stories you can see the flow of the story and the powerful pages he draws with almost movie like camera angles to his story board like panels.

, Frank draws in a style that is darkness and light contrasted against each other and this sets the tone of the whole comic. Although there are slight splashes of color here and there with blood and to emphasize points in the story like in many of his spin off Sin City yarns.

Frank Miller has been writing and drawing comics for years, since the late 70's and so he knows quite a bit about pacing in a story. When he wrote and drew Daredevil back in the 70's he wrote his comic stories in such a gritty way that you delved deeper into the character of Daredevil and you actually enjoyed the comic book series, particularly because Daredevil wasn't exactly Marvels best comic book title.

His use of camera angles in his art are the most intersting as he can create some of the most elaborate comic page panels around, look at the following page panel of art as he uses perspective to convey the characters situation of confinement in a prison cell.... 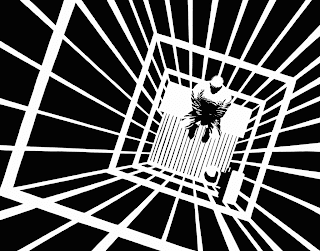 Frank Millers art can be detailed when he wants it to be and his art style is very recognizable as his own and that's to be celebrated as he really is a marvel of the comic book medium, sure I'm a fan of his art, his storytelling and even his movie directing isn't bad either (I suppose it's similar mediums comics and movies!)

One of the things that sets Millers style apart from most other artists is that it can suit any genre, science fiction, fantasy, superheroes and anything else besides. In The Dark Knight Returns he created a future world of Gotham featuring a weary Batman and that world was his vision and it's been celebrated ever since, because of it's raw storytelling and his art that helped shape and move the story along.

Frank Millers work is fantastic to look at and if you have the collected stories of Sin City, to thumb through them books is to peer into a world that is crystal clear, a gritty city of crime and murder and a well drawn work of art. 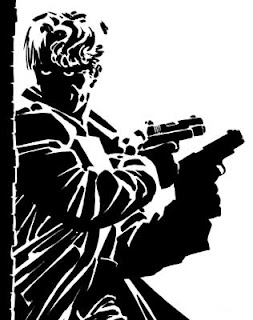