Drawing horror is something of an expertise for me, because I like to draw this kind of stuff all the time and in doing so I do often neglect the nicer things in life such as fairies and other fantasy creatures and characters that are quite innocent. ah well on with the show.....!

There are some tips that I can really help you with drawing horror stuff, first, you need to be in that frame of mind to draw some horror art and there is no better way than to watch a few horror films to get into that mindset of horror and depression(well ok maybe not depression!)

Once you've watched a few horror films, then try and draw what you might have liked, maybe there was a creature or zombies in them movies and you fancy a go at drawing one of them or an imaginative version of what you just watched.

I recently re-watched The Evil Dead, because I love that movie and so here are a selection of drawings and sketches inspired by this film, which are mainly faces of the dead.... 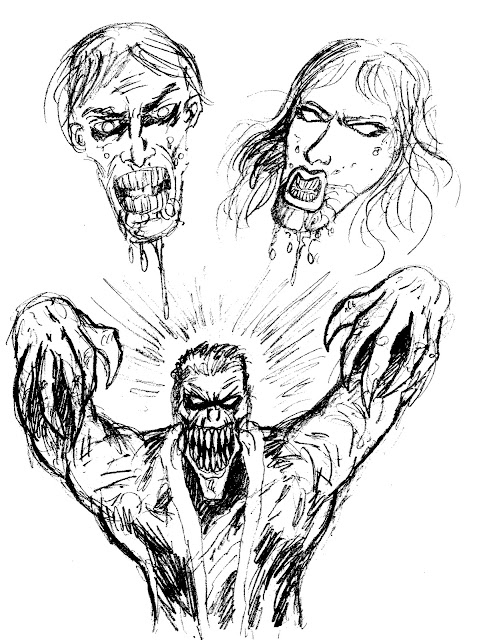 Also reading horror stories or comic books with horror stories in them are a great way of becoming inspired and can help you to draw some horror stuff, I find drawing a mix of characters and atmospheric buildings a great way of setting up stories within pictures, sort of like when an artist draws and then paints a painting you can see that it tells a story.

Side note: Been checking the features of my scanner and the drawings you see here are just pencil sketches and I've found out how to optimize the values to make it appear darker on the drawings and I just thought I'd share that with you, because I'm not a technical whizz or anything and I figured it out Yayyy!

Now here are a couple of horror sketches that I've left as they were in pencil... 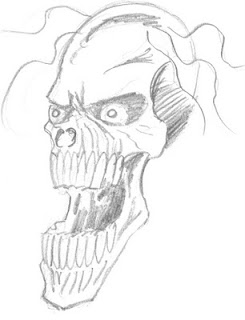 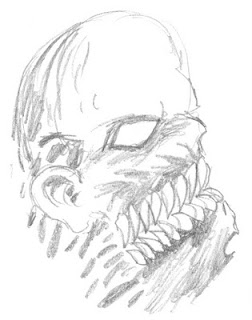 So when drawing horror art, it is a good thing to just sketch some ideas out and see what happens!
Posted by Wayne Tully at 03:27 No comments:

Sometimes a variation of different stick figures can make a superb figure in motion, in the following drawing video I draw a rough figure from scratch and then show you a page of quick stick figure drawings of which some of them helped me to draw the figure that I draw in this very video.

A Demonic style design on a ladies tank top with the phrase Lick It just for fun. This demon design I did awhile ago and it is a favourite of mine, just because of the design that I coloured in with felt tips and the phrase that wen with it.

You can buy this or in fact have this design on many t-shirts that are available at Zazzle. 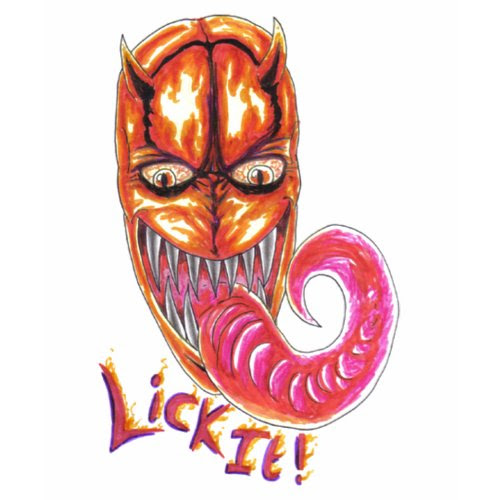 Lick It Demon Ladies Tank Top by waynetully
Create custom shirts on zazzle
Posted by Wayne Tully at 09:07 No comments:

Pencil shading drawings help to add depth to a flat drawing and if you have drawn a design or a drawing of something with a black inking pen, then it will look slightly flat, so shading it could be a good idea and so with the following video I wanted to go through this process of shading a drawing and what to do to determine your light sources so that you can create effective shading on your art.

In the drawing video I do tend to ramble on a bit, but I hope I explined myself clearly about the important process of shading with pencil tone ranges. The drawing example is of a demonic creature that I inked with a fine liner gel ink pen and rubbed out all of the old pencil sketch lines as I didn't want them interfering wih the pencil shading.

Effective pencil shading is achieved when you build up from the darkest pencil grade (B) right up to the lightest (H) so really doing this in stages is the best way of shading any drawing.

Watch the video which shows you how to shade a drawing.....

How To Draw A Warrior Soldiers Helmet

Drawing a warrior soldiers helmet really just takes a small amount of effort and imagination, of course looking at real life historic helemts of old will give you better ideas, but this is a drawing video that I did and it shows you how to draw a simple looking fantasy warrior or soldiers helmet, I used a HB pencil to draw this helmet and I had fun drawing this one and I think in the video it reminded me that I need to draw a skeleton warrior which is coming up soon!

So, watch the drawing video and see how to draw one possible soldier warriors helmet. 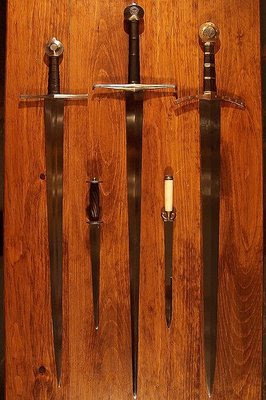 Photo Image By One Lucky Guy


Weaponry in the fantasy world are very common, in particular swords and spears are my favourites to draw.

Swords are those finely crafted decorative hilts of the sword that make them highly desirable to draw, you can have variations of the sword, Samurai, broad sword, kitana blade, machetti, bayonets to name a few hand collection of popular sword makes and blade types. most times we know that swords can be part of the characters we draw, so we tend to make them a focus, just like armour and shields, it's part of the actual characters profile and should be included in the original profile sketch.

A sword can be started off with a simple cross and then from there the exact details are brought out and a sense of depth and structure are realised to achieve the overall power of the swords blade. When I draw swords I usually tend to draw them last so that I can make a feature of the sword against the stance of the character.

The handles of the swords are often personalized or decorative too, but is often covered by the grip of the warrior or swordsman you create. But as with anything to plan the design is to draw it whenever the need arises.

Below is a quick illustration that shows you the 3 step drawing process I use to simply draw a sword, it's quick and that suits me best by finding easier ways to draw stuff is the way to go. 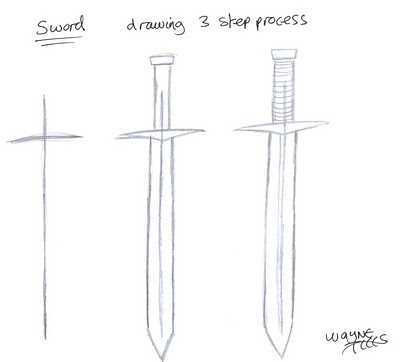 Spears are also very easy to draw and you can decorate them however you like. A simple pole and a spike is all that I do to draw a spear, see below.

I do also like to draw variations on the spear and not to make them the same in almost every spear design, I could alter the spear head or the handle design to suit whatever design I need to do, don't feel too rigid in ever trying to draw the same way, drawing is fun so go with whatever the mood takes you.

Below I drew a few spear variations to give you an idea, but really though weapons can either be one of two things, historically accurate or just look damn cool. 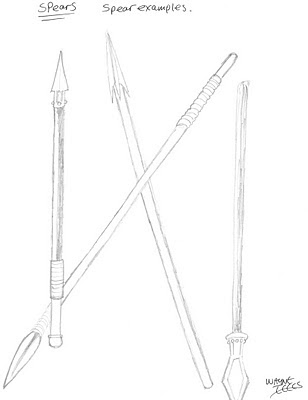 Drawing weapons of any kind is always easy if you have a reference photo on hand and something to copy to get the idea of drawing a sword or a spear and oce you've got used to drawing a weapon in general, you can get better at drawing one by adding your own designs into the mix. Go on, Try it!
Posted by Wayne Tully at 04:10 No comments: