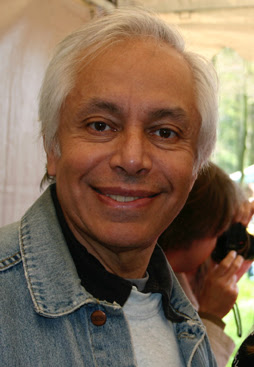 Image via Wikipedia
The fantasy art techniques book review by Boris Vallejo seems really promising on the outside from the books cover, but then you start to read the inside and it is a thinly disguised promotion of Boris Vallejos artwork, of course there are a few pages of the way the artist works and Vallejos art is brilliant, but I couldn't help to be disappointed with this book when I first got it, although it is an old book now as I've had it for over 8 years and I'm sure it's been around a lot longer.

If you're a fan of Boris Vallejo then this book is a must have if you don't already own it, as there are some useful insights and some early sketches which you see later he paints in his masterful style that is so recognizable in his 30 plus year artistic career.

So the book isn't a total loss as his art is inspiring enough to get by, but if you are looking for top fantasy art techniques like the title of the book leads you to think, then you will be disappointed too.

Good to flick through and get inspired by the art alone.

When drawing a figure running there are a few things you have to think about first, such as what foot will be coming towards you and what the arms will be doing, so that they look like they are part of the actual running motion, this short video attempts to show you one possible example of a figure running, although it is not an exhaustive run down of a figure running it is useful just for something to practice off and try to perfect your characters in running motions.

Movement in your drawings is so important and it brings them to life when you capture the motion of living characters that interact with their surroundings.

Drawing Pirate Skulls are fairly easy to draw and especially if you know how to make them look even the smallest bit pirate like and in this case the video just goes through drawing a skull on a side profile and then I simply add a head scarf on the top of the skull and hey presto...instant pirate skull.

The pirate skull can be dressed up in lots of different ways, for instance you could add an eye patch, a pirate hat and even horrible looking greasy hair can be drawn on the skull to make it look like an authentic pirate skull, of course one of the great things what with the Pirates of the carribean is that undead pirates look pretty cool in their pirate costumes and so look for an updated video here with me drawing a full skeleton crew pirate.

But for now, here's the draw a pirate skull video below:-

So if you follow the video, you will be able to draw a pirates skull if you practice what is being drawn right in front of your very eyes, of course you don't have to re-tread all of my steps to draw a pirate skull, you can add other fun stuff to it if you feel it is slightly flat and you can colour it too.

If you are interested in drawing skulls, have you checked out these drawing resources?

Draw Skulls Easily
Posted by Wayne Tully at 14:10 No comments: