I recently did a horror commission of a classic rendition of The Mummy, now with my drawings I always try to do some off centre ideas that don't show all of the full character, but enough to show a detailed and fun commission, thankfully the Client liked this idea and so I ran with it.

The idea of drawing the mummy had to include a bandaged horror creature drawing and adding just the top head, shoulders and one arm raised helped to make it look like it was waking up from an ancient slumber. Plus the cobwebs were a nice addition to the drawing.


A sharpie marker was used for the main outlines, this doesn't have to be exact because we will be blacking out the background and I can draw the cobwebs in and any other stuff such as correcting the outlines in white.

I like to try and black out the background and try and make it as streak free as possible, but this wasn't necessary as I will do that through Photoshop to clean the image up for the client. I used a large Chisel tip Sharpie marker for the large dark areas and remembering not to go over that small hanging bandage on the arm.

More details were added with fine line ink pens to simulate rotting flesh and to attempt to make the bandages look rotten too. Further white ink lines were added with that classic Sakura gelly roll pen on the cobwebs and extra juicy drips dripping from the undead corpse of the Mummy


I did do an alternative version of this mummy drawing, way back in Halloween 2015 and I just recycled the composition of that basic ink drawing. And here is that ink sketch. Often the most annoying thing about quick sketches sometimes is, they look better than the commission I'm trying to draw, so I will develop this quick ink drawing into an art print at some point

See also my other mummy drawing post in which I show you how to draw a mummy through drawing videos here - How To Draw A Mummy
Posted by Wayne Tully at 05:52 No comments:

Drawing A Spawn Art Print Illustration With Promarkers and Copics


Drawing an Al Simmons Spawn art print with Letraset Promarkers and Caio Copic markers. Spawn is a favorite comic book of mine that I have collected and read the comics ever since they came out in 1992. Originally drawn, written and created by Todd McFarlane as one of the head lining comics at Image Comics.

So with this idea, I wanted the focus to be on the Al Simmons Spawn character and a close up head shot of the horror character. The costume is always the main feature, so I wanted a portion of the cape and chains to be appear in the illustration.

I used a copic multi-liner for the fine detail on the head and a thicker copic pen for the outline and shadowed areas on the face. If you look closely on the second image below, you'll see that I used the infamous White gelly roll ink pen to add some nice highlighted flesh on the darker areas of Al Simmons face.

I will be doing more spawn art print illustrations, mainly because as a fan of the comic I like drawing the character.
Posted by Wayne Tully at 05:20 No comments:

Drawing An Exploding Skull Illustration In Black And White Ink

When drawing a good idea like an exploding skull with just black and white ink pens, the key thing to remember is the structure of the skull first and to what extent you want the skull to be destroyed, it's that simple.

Here follows some progression shots of drawing this concept on A3 size paper. The first rough sketch in pencil I pretty much nailed that moment, just as it's started to explode with the eyeballs popping out of the skull like Olives.

If you are trying to draw this kind of horror art, I would recommend you do some rough sketches beforehand to get the idea right in your head and the placement of the design. For me, I knew early on that the skull had to be directly in the centre of the paper with everything flowing from that source image.

I used a mix of Pigma Microns and uni-pin fine line ink pens to ink the basic outline of the skull design. The inking stage is always the best time to clear up anything which you don't like about the drawing.

I used a thick bullet tip Sharpie marker for the black space in between all the white splatters which will represent the blood. I call these types of thick markers disposable, because they don't last long usually when filling in large areas of black in an illustration. 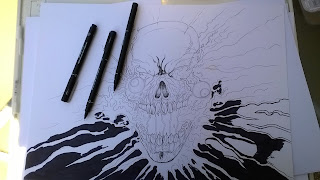 Once all the black areas were filled in, I used a White Sakura Gelly Roll ink pen to add more white splatters simulating the blood. I quite possibly won't be coloring this illustration in any time soon as I like the contrasting black and white of this piece.

Sketching is the best way of seeing if a drawing or illustration works and quite obviously it is my preferred route to create an illustration that my customers will be happy with. This post shall link to different posts on individual fiverr commissions I work on frequently on my Fiverr account Waynezart horror illustration.

But the first one here is a Japanese Demon illustration I got commissioned to create and I enjoyed drawing this one.

I remember being given some great japanese demon art reference files that really helped me draw this design from the Client. There is just something other worldly and cultural about these Demons that reside in the Japanese mythology.