I'll be attending Hull Horror Fest in October and to prepare for this I am drawing some new horror artwork that will be available as art prints for the event. This will be my first time attending any such event and it'll be a mix of nervousness and cool all rolled into one as there will be other Artists there and so this blog post will document everything including the preparation for the Festival, right through to being at the Horror Fest.

8th August 2016 - Work begins on 3 - 5 new artworks as shown in this video - Horror Art Prints For Hull Horror Fest and there are a Phantasm tall man illustration and a Demons drawing as well as a Ghoulies one that are looking good, the Omen one needs more work and I'll more than likely re-draw that one.

10th August 2016 - Sorting through older artworks that I didn't finish and there are loads of pieces I would like to complete, such as a basketcase one and a The Thing illustration which are A3 size illustrations I begun back in 2014 which remained unfinished.

This sketch is a random zombie design that I want to make stickers out of, will see what happens with this one 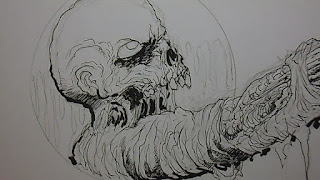 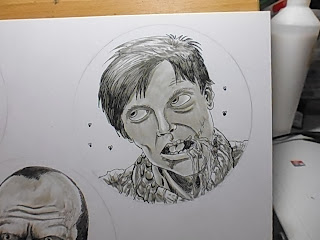 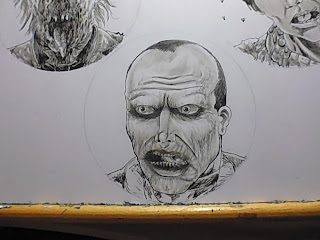 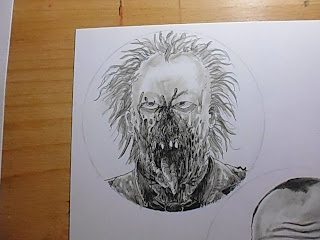 Also I am grey coloring some undertones on this Demons piece too before coloring. I just need to ink the top of the head as well as sketch the proper Demons logo, so that customers know that this will be a Demons horror movie homage artwork. 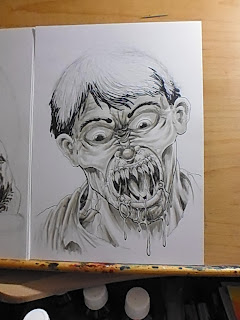 I've used some copic warm greys to grey tone them before coloring and I like the way they are turning out, so much so that I am investing in more copic marker refills as they last longer than the standard pen markers.

27th August 2016 - I've since finished those horror stickers but have more planned. Here are the finished stickers available from Zazzle and I'll be printing out some myself to sell at Hull Horror Fest.

1st September 2016 - Working on some new horror sticker ideas and am pleased with some of the results. Chucky, Ghoulies and a Critters one...oh and a Killer Klown A4 sized piece of artwork that will be an art print. 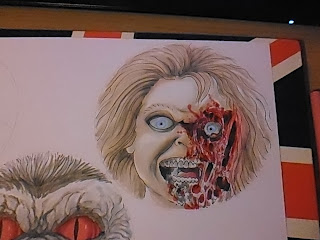 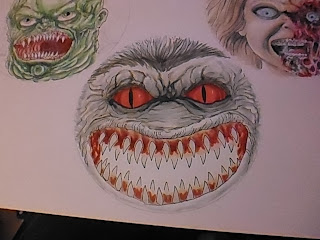 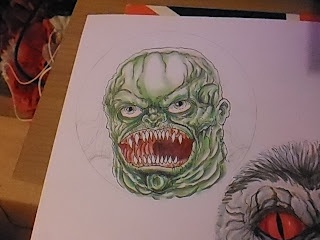 The Killer Klowns From Outer Space was a spectacularly fun horror film, although looking back the movie wasn't as frightening as I remember. Almost comedic in it's approach, but still a favourite movie of mine and so with that in mind I wanted to do another Killer Klown illustration that hopefully will look a bit more professional than I used to draw.

I'm using Copic Markers and Faber Castell Polychromos Pencils to add the colours, first grey toning and getting the tones right before adding proper colour to the piece. 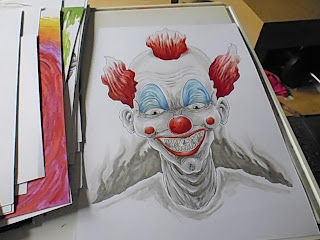 4th September 2016 - I've decided to plunder some older artwork that would also be a good fit for Horror Fest including a Zombie Superman drawing that looks awesome, but really needed color adding to it. So I used some copic Ciao Markers with some much needed copic refills and some polychromos pencils for the brighter colours. 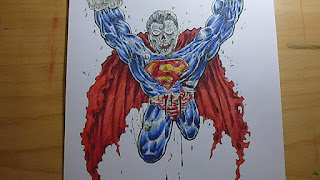 Also I've been working recently on a Nightmare on Elm Street Freddy Krueger illustration piece too, which was referenced from a photo, but I tried to go my own way with it and it'll have a unique background full of boiler room pipes. 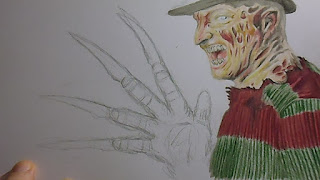 I'll update this post frequently with new updates photos of artwork and other stuff as I continuously prepare for the horror fest.

Acrylic painting an evil clown painting on a micro canvas, the clown is inspired by the new Rob Zombie movie 31 and it was a small art challenge to paint that small on a 7cm by 7cm canvas.

Here's the video showing me painting this. Enjoy!


If there are any other things you would like me to paint or even cover in a tutorial then please let me know.
Posted by Wayne Tully at 07:27 No comments: