Sketching demon tattoos is a little hobby of mine, ever since I saw those two classic Dario Argento movies Demons and Demons 2 I have always sketched demons at least once a week ever since, demons have many variations that you can sketch out and that's why I like to draw monster creatures and demons are my most favourite to draw, often you can draw just the heads and then work on what the body will look like later on.

Drawing a demon tattoo idea is what I do often and I like to either sketch with pencil the initial idea or I'll sketch a drawing and then ink it to see how the design could look and this is what I've done here with the following few small sketches, tattoo designs are different from the finished versions as the complete tattoo drawings need to be crisper and more tattoo friendly and so that means losing alot of the over top detail that I always add to my comic book type art.


The first demon idea was one I did previous but with a skull in the centre of a flame design and sometimes this works as a standalone tattoo and one that can be re-drawn many times with different creature or head concepts in the centre. 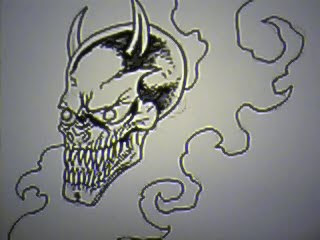 Obviously different ideas can be inspired by other drawings and designs that you do and demonic tattoos are no different, I suggest that you build on the old sketches that you already have, I'm sure you have half finished drawings that could be reworked to create a finished drawing that is much better.

The drawing below was an idea I had whilst watching ghostbusters as it has a ghostly feel to it slightly and although it is just a head drawing of a demon tattoos it can be re-designed at a later stage. 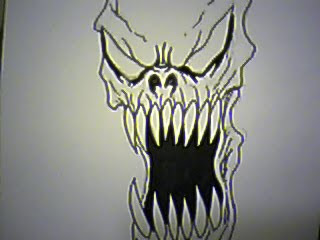 Sometimes you come up with lots of tattoo ideas other times you struggle, but what I do is force myself to draw ideas even when I don't feel like it, because you find you can draw some great stuff if only you set aside some time to get on with it.

The demon tattoo idea below is a variation on the first one, except it has a swirly almost tribal smoke but not quite background design to it instead of a flame design. I did at one time have lots of demon heads all drawn in a massive sketchbook, but to my horror I lost it whilst at college and I still have nightmares about losing that book! 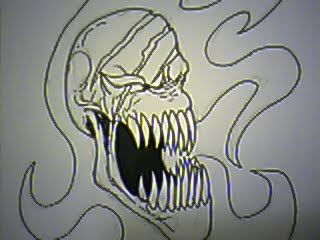 Demon creature sketching is becoming more and more a part of my weekly routine, together with other fantasy things I like to draw, you can find out what the best things you can draw just by practice and lots of it.
Posted by Wayne Tully at 05:06