Drawing fantasy fairies can be easy if you follow these steps to drawing them. We all know Fairies are them small winged girls that fly about the place and sprinkle fairy dust around and in fact I never used to be a fan of drawing Fairies until I saw the work of Amy Brown and Sara Butcher, it was then that I thought, yes, I'll have a go at sketching them and trying to draw them, at first it was hard, but when you start to learn something new that you haven't drawn, then it will be difficult until you pick it up with practice.

When starting to draw a fairy, I like to get an idea of the figure first, because in my early attempts I did try to run before I could walk sort of thing with drawing fairies I would draw the wings first and then try and draw the fairy from the top to the bottom,an often it didn't work out very well, so I always with any drawing create a foundation of which to work from.

And this basic foundation drawing covers the rough figure of the fairy as pictured below.....and it doesn't have to be accurate or even perfect, as you can change things later, because I sure will! 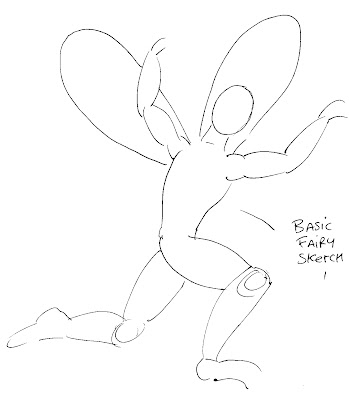 And now we can refine that first fairy drawing by taking it and placing it on a light box or just place a piece of tracing paper over it, now as an artist you should be thinking in ways to improve the figure of the fairy, not re-trace the figure underneath, I use a pencil at first and then once I've got a good sketch going on I start to quick ink the figure, so I can scan it in my computer and clean up the drawing at a later stage.

Now the fairy figure looks a lot better, although the hands are wrong and this can be sorted out in the next stage of our drawing....as I just wanted to get the figure right and also notice how it is different from the original fairy sketch, I changed the legs and the way the fairy is flying and as an artist, this is what you do, you problem solve, you work out how to best draw something and that is all you can do, to refine the drawing.... take a look!.... 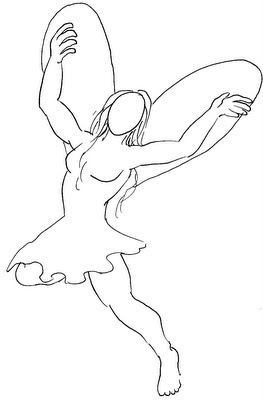 Now the next part does involve a bit more work on the light box or transfering the idea and refining it further on tracing paper, but this is a solid method for showing you how fantasy artists refine ideas and make them look sparkling and magical and there maybe things that need to change still and that's ok, Rome wasn't built overnight in 30 seconds, so we try and make the figure better and also other details like the hands and the foot, because the other foot is behind the fairy, although I could have a few toes poking out, but it may look like a ding dong and this ain't no fairy in drag!
The third drawing seems much better as you go along and keep refining it, but there does come a time when you should stop and so I have stopped and just inked up a quick version of a fairy below.... 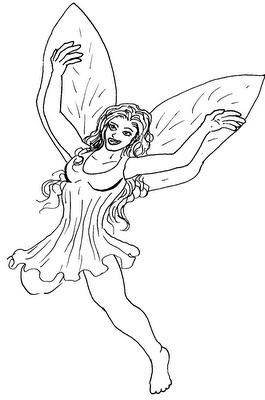 So just have fun with fairies (?) drawing them I mean!!