Working hard on a couple of childrens books, to which I will not reveal the characters or any sketches at this point until I'm near enough publishing the thing, but it's a classic childrens book, one of them is for under fives which will be minimal words, but more emphasis on the pictures and that art that will tell the story more, I've often been interested in making a childrens book and until recently I thought I couldn't do it, but there is such things as self publishing on great publish on demand sites such as Cafepress, Lulu and Creataspace to name a few that I thought yeah just go for it.

I suppose the last few years I've been fooling myself into thinking that I have to have a normal job, but that hasn't made me happy at all, you've got to have dreams to aim for in life because we are all on a short life lease if you think about it, average age expectancy is around 70 years, but anything could happen in between that time, so do things now to try and do the things that you want to achieve in life and don't worry about rejection and all that scared to get up in front of other people nonsense and shout what you're doing. Just get on with it and see if it works, that's my motto now!

The other projects that I am still trying to get together are a couple of graphic novels and these are coming along slowly, mainly because I am a perfectionist in the art of graphic novel creation and plus I do want to colour them too which will take more time, I did plan to have one of them published by the end of March, but that didn't materialize so I'll just say watch this space.... 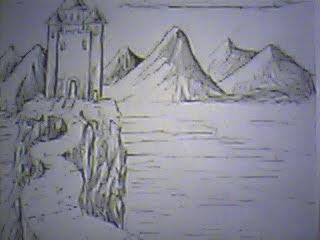 The above web cam screen shot is of a fantasy world castle scene that I did for a three part drawing video lesson series on how to draw a fantasy world, it is intended as the first part of a three part series on drawing different fantasy scenes and you can view the full article here - Draw Fantasy Worlds with the 3 videos to see how it turned out.

Also if you do read this blog regularly when I update it that is! you'll know that I've increased my Youtube drawing video output as I now do them every week, around four to five or maybe more videos a week, that will hopefull inspire you to draw your own fantasy art stuff and I still welcome video requests, in fact I'll put them to the front of the queue to create, because I'd like to help out with any drawing problems or just to make a video that will inspire you to draw something of your own.

Lastly I would like to know if any of you have drawing projects that you are working on, that you wouldn't mind letting us know of, it'll be nice to know that I'm not alone trying to break into the world of fantasy with my own books and stuff, you can leave your comments below and I look forward to your replies.

Have a nice day everyone
Posted by Wayne Tully at 09:26