How To Draw A Pirate

is fun and my son said to me"Dad can you draw me a pirate? and so I said "ok!" and here we are, a Pirate drawing tutorial with inspirational steps to follow to learn how to draw a pirate. Let's draw a pirate!

Pirates have the best costumes, at least that's what I used to think as a kid, dressing up in a pirate hat and big red over coat, but Pirates can look quite like horrible criminals with scars on their faces and dirty clothes.

At first in my sketches I was going to draw Captain Hook, but decided to do a different pirate instead. Pirates are best drawn with a cutlass I think, so that's what I concentrated on.

In the first sketch below I focused on the figure, the basic layout that makes up any drawing and to get this right is the best thing to do....

Notice that the muscles have been drawn quite large and more dfined, because I wanted this pirate to be a brute and something of a hard pirate who liked to fight, give your pirates character by defining their figure shape early on. 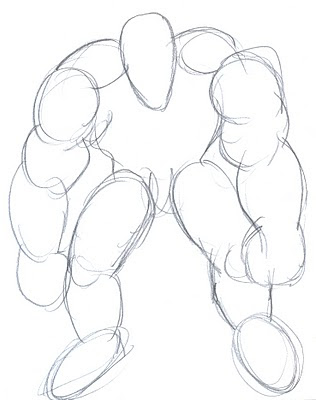 The second pirate sketch dealt with refining that figure form a lot better and really loosing a lot of the circular shapes I'd used to build up the basic figure drawing of our pirate. You can see some of the prate qualities coming through in the following design sketch with the bandana becoming quite noticeable.

This step is as important as the last as you are moving away from a pre-sketch sketch to a more built up version which gets better every time or at least it should, try practicing if you make a mistake, you learn from your mistakes. 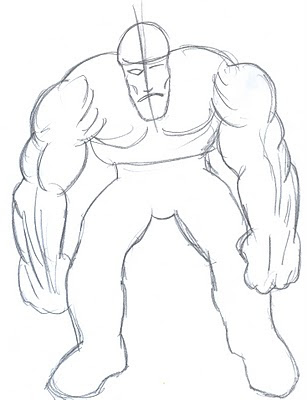 The third sketch really starts to bring the pirate drawing together now, as more of the muscles are defined and some of the pirates clothing is worked out much better. Also we can see the face with the nasty pirates features with a grim and gritty look like he's going to kill someone to get some treasure. 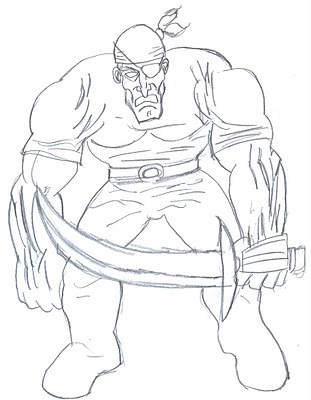 The fourth and final drawing sees the pencil lines becoming more darker now and some of the details are ironed out a bit more, take a look below..... And there we have it, a pirate, try drawing this pirate yourself or make up your own inspired by it. Drawing pirates is fun!

Also see how to draw Captain Hook on video

Or you could buy this book below to get a comprehensive guide on drawing pirates....