How To Draw A Minotaur

Minotaurs are huge bull like creatures usually depicted in the fantasy worlds as almost human form with hooves for feet and horns like a bull on the head and drawing them this time round has been fun and I hope you enjoy this little drawing tutorial.

How to draw a Minotaur

When starting to draw this minotaur I wanted to try and aim for a larger than life Minotaur, I'm sure you've seen the Narnia films with the Minotaur in that movie, well that is a great model to get some inspiration from and that's what I used,well at least the action figure I bought my son anyway.

The first step is identifying all of those muscles and grouping them in round circular shapes like I have in the sketch below, the reason I do this sometimes is to just show you how easy drawing figures actually is, when I'm drawing stuff out of my head I've pretty much learnt how to draw without using these shapes to show the muscles now and I just draw the creatures and figures as I see them in my head. 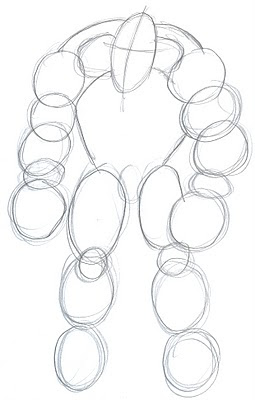 Once you have agreed a figure for your Minotaur, it is time to move on to the next stage, which is trying to identify how you are going to draw the realistic muscle mass instead iof the simplistic shapes, I tend to use a lightbox a lot if there is a complicated drawing I want to experiment with and you can really get some great results through using a lightbox.

Many people just assume lightboxes are just a tool for tracing, but if you use them right, they can be a very valuable tool for artists to create drawing out of plain rough draft sketches and much more, I highly recommend you buy a lightbox or at the very least you make one, if money's tight, just use a large window during the day with the sunlight shining through, worked for me for awhile, until I actually needed to work more on the night on drawing projects.

See the second sketch of the Minotaur as it really starts to come together quite quick on this one.... 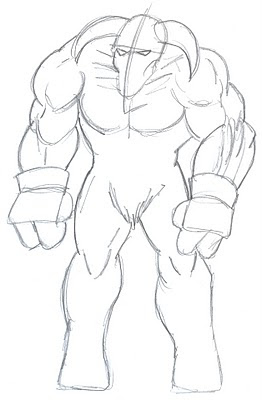 I like the next step of our drawing a Minotaur as the details are the key to pulling this creature drawing off and starting to draw a muscle bound Minotaur as you can draw in exact details and the things that you want to achieve very well on this stage of drawing.

The hooves are the main challenge and the trick is to make them look real if you can, and I barely managed it, but I've never drawn a Minotaur before, so the next time I do, I will look closely at horses hooves in depth to take note of them and draw them better.

Here is the final pencil drawing of the Minotaur...

I will update this drawing of a Minotaur at some point, maybe with drawing an in depth closer look at the Minotaurs head. I hope you enjoyed this Minotaur inspiration!
Posted by Wayne Tully at 15:12